I participated in sculptor Shelley Wilson’s Body Politic project http://www.bbc.co.uk/news/entertainment-arts-11625272 and this is the commentary I gave her to accompany the exhibition: 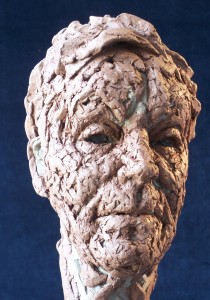 The sculpture: Not very flattering!

Being an MP was not something I thought about when young.  I started off as a scientist, motivated at an early age by the wish to help people like my father, who suffered from schizophrenia.  The work I did made a small contribution to our understanding of the processes that go wrong in mental illness.  Getting the exact opposite of the results I was expecting in some of my experiments taught me to always have an open mind and to look at all sides of an argument, not just to tow the party line.

Maybe that’s why I was not a successful politician.  When a parliamentary candidate, I recall a fellow Labour member of the Police Authority trying to persuade me to go along with the early retirement of a police officer implicated in several miscarriages of justice.  He told me that “if I wanted to be where I wanted to be” I should not rock the boat, as criticising the police was unpopular.  Despite ignoring that advice, with the help of a lot of hard work and a good campaign team, I did manage to get elected to parliament even though Labour did not win the election.  But I didn’t succeed in climbing higher up the greasy pole of politics as I never managed to hold back from criticising the establishment line when I felt it was justified.

Sorting through some of the paperwork accumulated over the last 18 years, I recently came across a letter from the journalist, Paul Foot, congratulating me on a speech I made in support of the release of the men wrongly convicted of the murder of Carl Bridgewater.  I am glad to be associated with people like Paul in campaigns like that which were eventually successful.  I remember Paul once telling me he admired me because I was not like other politicians he had met, a comment that still means a lot to me.

Things did get better when we eventually got a Labour Government and there are some really lasting achievements, particularly in changing social attitudes towards minority groups.  Today it is hard to believe the prejudice in the content of responses from Tory ministers in the 92-97 Government when I took up the concerns of trans-people who could be legally sacked just because of who they were.  I am really proud too of the transformation in our mental health services.  Maybe I could have had more influence over policy if I had had more skill in putting across criticisms I had of policies under Blair and Brown, particularly on the welfare state and the economy.  If we now had the simpler and fairer tax and benefits system I advocated, people would defend progressive measures because they would understand what changes mean for them.  The NHS gets that sort of support because it is based on universal principles and is used by rich and poor alike.  Greater investment in transport and housing would be saving money by now.  More affordable homes to rent would have meant fewer people getting into debt they couldn’t afford and lower housing benefit bills.

Or maybe my lack of influence was because not enough fellow MPs were willing to stick their necks out.  Another snippet I uncovered in my archives was a letter in 1993 to The Times from Anthony Beaumont Dark, my predecessor as MP for Selly Oak, who was also a bit of a rebel, strongly opposing the poll tax.  The letter bemoaned the trend for people to enter politics early in life with the objective of getting into government.  This, he said, can only happen if you vote as instructed, which you would have to do if you had not already made a career for yourself.  Like me, he entered parliament in his forties.  He was right to say that parliament needs more people who have experienced the outside world and have the confidence to be independent.  Perhaps then we would not make such disastrous mistakes as going to war in Afghanistan and Iraq!

Frustrated by my lack of influence and wishing to escape from the heavy workload that being a good constituency MP entails, I made a conscious decision to leave parliament.  I am lucky that I am secure enough financially not to need paid employment.  I am a Vice President of the British Association for Counselling and Psychotherapy and a Governor of my local mental health trust, as well as being active in a local environmental group.  I hope to use the experience I gained as an MP to benefit these organisations.  My lasting legacy will be an early Victorian terrace in Birmingham that I saved from the bulldozer when Chair of Housing and the hovel in the Welsh Hills that, over 30 years, I have helped restore as a self-sufficient home.